OVERVIEW OF A FEW ACRES OF SNOW

A Few Acres of Snow places players at the head of the two most powerful empires of the 18th century in the context of the war between them for the control of the east coast of Canada. In this asymmetrical deck-building game, each player will have to exploit the advantages of his empire and try to compensate for its weaknesses, to win either by a brilliant military coup or a long war of attrition. And all this… for A Few Acres of Snow.

Place close to the game board:

Place the 2 siege markers (black cylinders) on the 0 square of the two siege tracks.

Course of a game round

The actions are divided into 5 types.

Here are the different symbols that can be found on the cards:

As well as the two types of cards in the game: 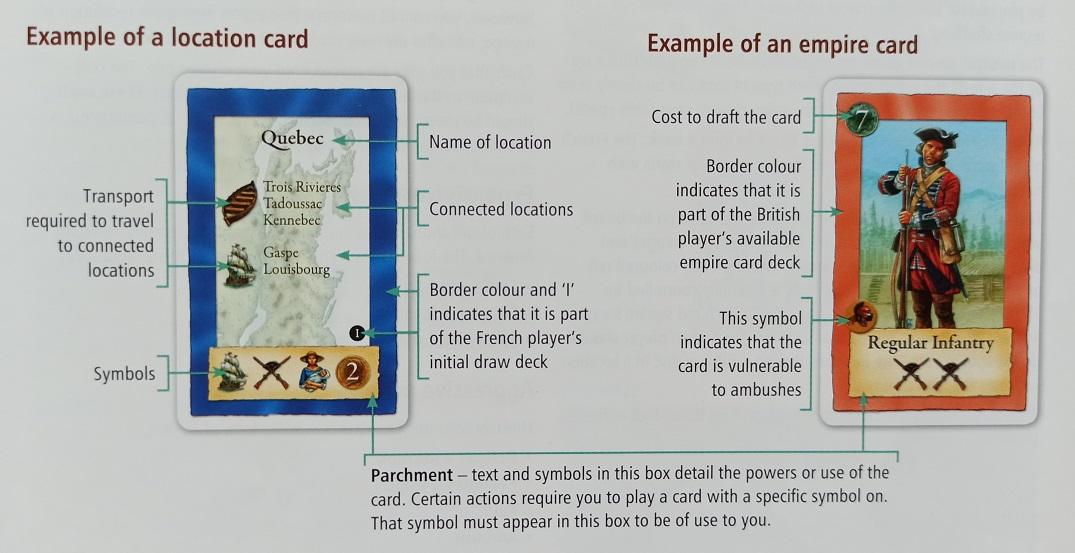 The Location cards (see the card on the left in the example above) represent the locations you control, and are starting points from which you can colonize other locations. The Quebec location card provides a lot of information:

Requirements: card of a controlled location linked to the location to be colonized + card with the required transport symbol (+ card with the settler symbol if necessary).

Example:
The British player wishes to colonize Deerfield. To do so, he must:

This action consists in improving one of your villages (cube) to transform it into a city (disk).

Requirements: Card of the location to develop + card with a settler symbol.

Action: Replace the cube with a disc.

Action: Place a Fortification disc on the location, under the cube or coloured disc.

Advantages: The fortification protects the linker from raids and adds 2 to his defence in case of siege.

Limitations: You can fortify a location only once.

Attacking an opponent is performed almost the same way as colonization, the difference being that instead of settlers, soldiers are brought in, represented by the military symbol.

Requirements: card of a controlled location connected to the target location + card with the required transport symbol + military force symbol card (can be a ship symbol if the attacked location has a ship symbol).

The siege has now begun and will last until one player wins or the besieging player retreats.
Note: you may only besiege ONE location at a time, although you may also be involved as a defender in another siege.

Example:
The British player lays siege on Louisbourg.
He plays the Halifax card (the location he controls, which connects Louisbourg by sea), then a card with a ship symbol, and finally a Siege Artillery card (which costs 3 coins to play). He places his Besieged Location marker in front of Louisbourg. His first two played cards are discarded, his Siege Artillery card is placed on his “British Siege” space.

In addition to having an initial defence of 1, Louisbourg also has one defence symbol (indicated on the board). The Siege Strength marker is therefore placed on the 2 (1 + 1) box in favour of France.

Then the British player moves the Siege Strength marker 3 spaces in his favour, corresponding to the military strength points on his Siege Artillery card.

As a second action, the British player plays a Regular Infantry card, as well as a Military Leader card (free action). He therefore moves the Siege Strength marker another 3 spaces in his favour, and places both played cards on his “British Siege” space. 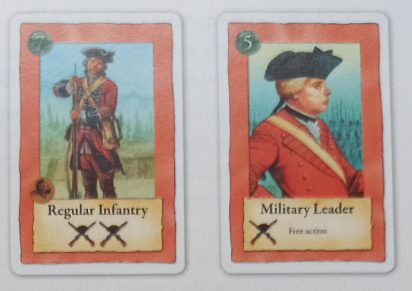 Requirements: Any card with a military symbol.
A ship symbol counts as 1 strength point if the besieged location can be reached by sea.
Siege artillery costs an additional 3 when played.

Action: The card must be placed on your corresponding “Siege” space.

Note: playing the Military Leader card is a free action.

Example: It is now the turn of the French player, who chooses to fight back. He plays two siege reinforcement actions: a Regular Infantry card and the Port Royal card, which has a ship symbol. Since Louisbourg has a ship symbol, it is accessible by sea and can therefore receive help from warships (for a military strength of 1 per ship). The French player therefore moves the Siege Strength marker 3 spaces in his favour, and places both cards on the “British Siege” space on his side of the board.

You can launch a raid on a location connected to a location that you control by rivers, lakes, roads or Indian tracks (dotted line on the board).

Requirements: a number of cards with the Raid ability corresponding to the distance to the target location.

Play an Ambush card to eliminate an enemy card. Your opponent can block your ambush by discarding a Block ambush card.

Your opponent must give you a neutral Native American card from his hand or reserve.

Play one (and only one) location card to take the amount of money indicated on it.

Play a card with a ship symbol, then any number of cards with a money symbol, and take the amount of money corresponding to the cards played (except the card played for its ship symbol)

Play the Dealer card and any number of cards with a fur symbol. Earn 2 money for each card played.

French player only. Play the Louisbourg card with another card that has a ship symbol to steal 2 coins from the British player. If he does not have enough money, take the missing money from the bank.

Take one empire card (either from your “Available Empire Cards” pile or from the Neutral Empires card pile. Pay the bank the cost, if any, of that card (shown in the top left corner).
Place the card on your discard pile.

Pick and discard one or more cards from your hand. The first card discarded costs nothing, each additional card costs 1 coin.

4.3. Placing a card in reserve

Pick a card from your hand and place it in your Reserve space on the board. You can place as many cards in your reserve as you want, but each card placed costs one action.

Take all the cards from your reserve and put them back in your hand.

Choose one or two cards from your hand and place them back in the corresponding “Available Location/Empire Cards” piles.

French player only. Pay 2 coins to look for a card of your choice in your discard pile, then put it in your hand.

Withdraw from a siege

The game ends if ONE of the 3 conditions is met:

Players add up their victory points:

The player with the most victory points wins (in case of a tie, the French wins).

OBJECTIVE OF SUMMER CAMP: The objective of Summer Camp is ...

OBJECTIVE OF AMONG THE STARS: The objective of Among the ...

OBJECTIVE OF STAR REALMS: The objective of Star Realms is ...

OBJECTIVE OF ASCENSION: The objective of Ascension is to collect ...