OBJECTIVE OF CHECKERS:  The objective of this game is to get as many pieces from your opponents as possible.

TYPE OF GAME: Strategy Board Game

THE HISTORY OF CHECKERS

Checkers (Draughts) is an ancient game. The earliest known variation of the checkers game was found in Ur, Iraq, and carbon-dated to around 3000 B.C.E. In Ancient Egypt, around 1400 B.C.E., Egyptians played the popular game named Alquerque, which used a 5×5 board. This game was so well-loved in the ancient world, that it spread to the western world where it was played for thousands of years.

In France, around the year 1100, the idea of playing checkers on a chessboard was born. In doing so, the number of pieces expanded to 12 per side of the board. After this modification, the game was called “Fierges” or “Ferses.” After, it was quickly discovered making jumps mandatory increases the vigor of the game. This version was called “Jeu Force.”

THE PLAY OF CHECKERS

Below are the standard United States rules for Checkers.

This game is for two players. Each player starts with 12 colored discs (of the same color). Typically Checker discs come in sets of black and red.

A Checkerboard has 64 squares of alternating colors, 32 light, and 32 dark squares.

Players place their discs (pieces) on the dark squares on their side of the board. 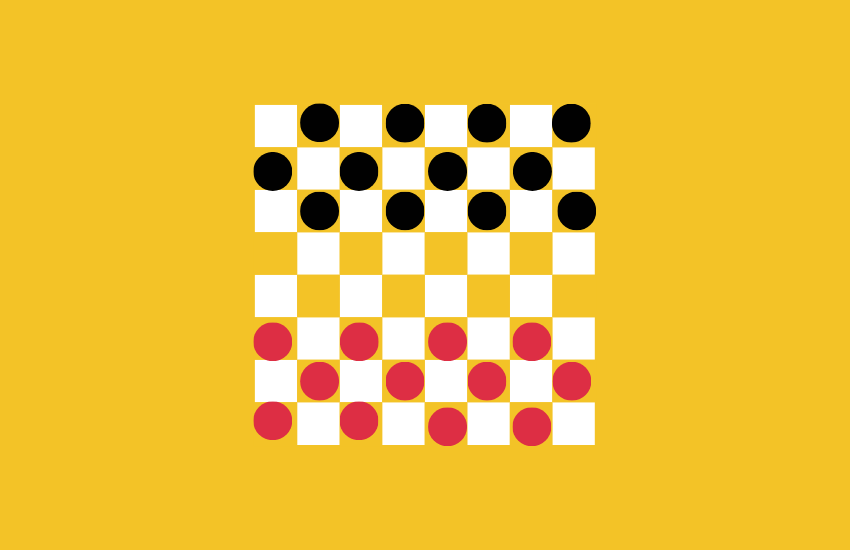 Moves can only be made on black squares, so the pieces move diagonally. Pieces can only move in a forward direction, toward their opponent.

If you are moving your disc forward, and not capturing your opponent’s piece in the move, you may only move it forward one square. 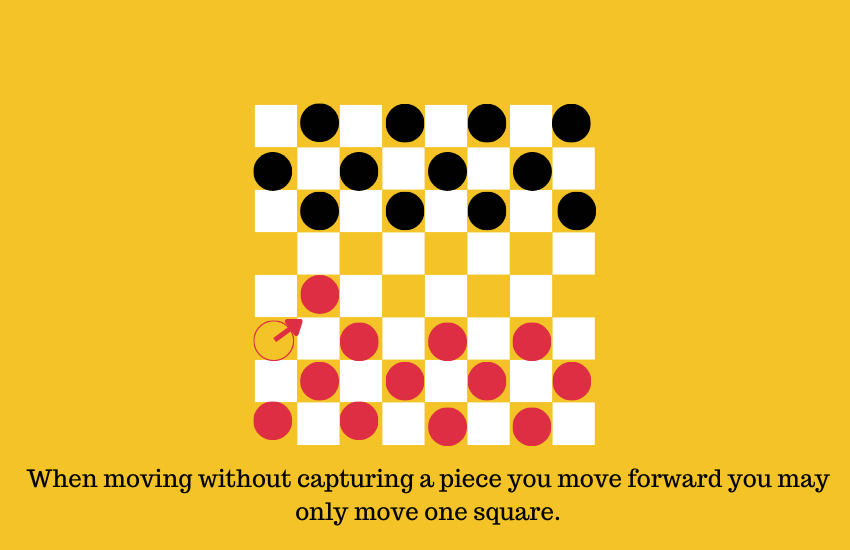 In a capturing move, a piece leaps off the opponent’s piece in a diagonal line, landing on a dark square on the other side. While you can only capture one piece per jump, you can make multiple jumps in a single turn, if the positioning of the pieces allows. 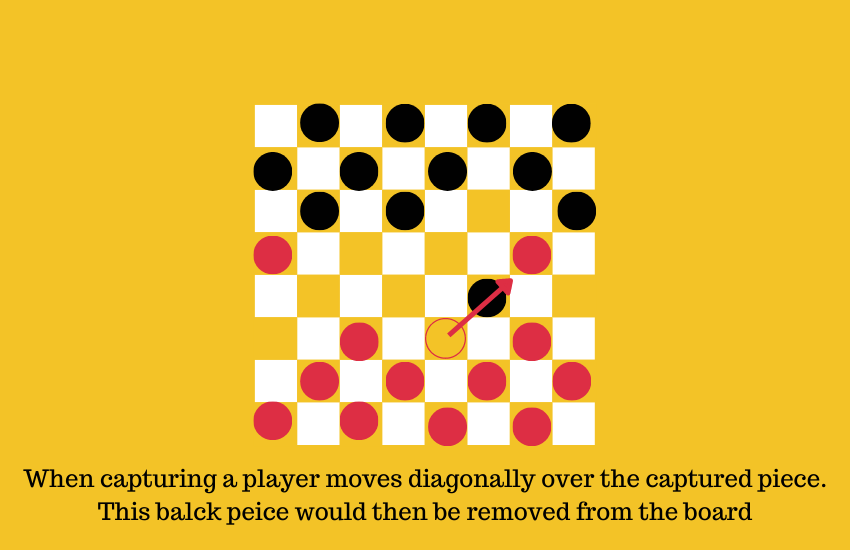 After a piece is captured, it is removed from the board, and collected by the opponent.

If you have the ability to jump your opponent’s pieces, you must. However, in the event there is more than one capture possible from a single square, you may jump whichever piece is preferable.

Once a player has a piece that reaches the first row of their opponent’s side of the board, that piece is kinged or becomes a king. It is crowned with a piece that had been captured by the opponent. King’s stand twice as tall as a single piece. 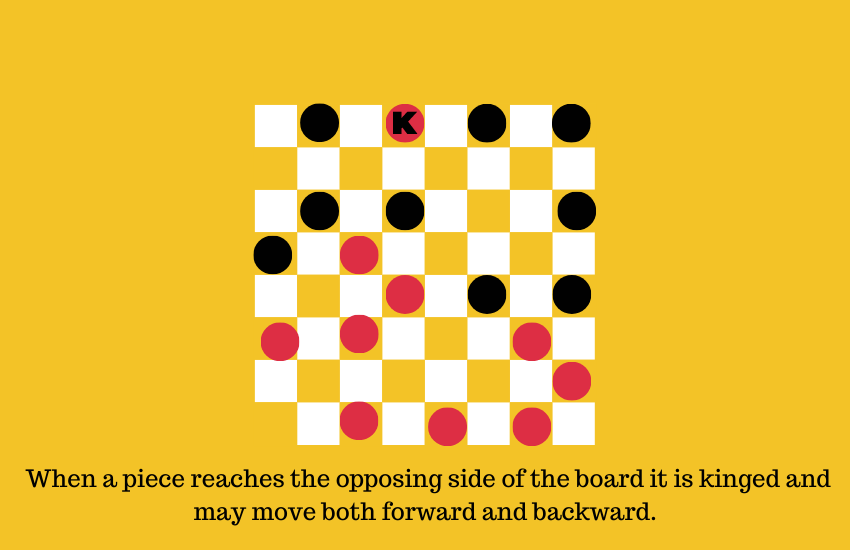 Kings can only move diagonally as well, however, they can move forward or backward as opposed to single pieces.

Kings can also jump both forward and backward (diagonally) in the same turn, a multi-direction multi-jump.

Suicide checkers, or as it is sometimes called Anti-checkers, is played reverse of regular checkers. The winner of checkers in this variation is the player whose pieces are all captured first. The winner can also be found if they are unable to move legally.

Flying Kings can move across multiply squares as long as they are unoccupied. If there is more than one path to capture your opponent’s pieces, one must use the path that results in collecting the most checkers. If during a move, you land in the king row but are still able to jump backward, you must jump backward and the checker is not kinged. In order to be kinged the piece must land exactly in that row.

Canadian checkers use a 12×12 board and 30 checkers per player. The same rules as international draughts also apply to this game.

Brazilian checkers use an 8×8 board and use rules similar to international draught rules also.

Italian checkers use an 8×8 board. The central difference between Italian and US/UK checkers is that regular checkers cannot jump kings.

Love this game? Then check out Sorry! for another great classic.

What is the difference between a light square and a dark square in the game of checkers?

Players will only play on the dark squares of the board, the light squares are left empty.

When you play checkers when can you move both directions forward and backward?

Only when you have a piece kinged may you move in both directions.

How do you capture one of the opponent’s pieces?

To capture an opponent’s piece you must jump over your opponent’s piece with your own checker. This must be done diagonally, and while only one piece can be captured per jump, you may make multiple jumps with the same checker.

What is significant about the back row of the board?

Once you have a piece reach the back row of the board (from your perspective, it is also the front row of your opponent’s side), your piece is kinged.

How do you win at checkers?

OBJECTIVE OF HEY, THAT’S MY FISH: The objective of Hey, ...

OBJECTIVE OF WHOT: The objective of What is for one ...

OBJECTIVE OF HOMEWORLDS: The objective of Homeworlds is to overtake ...

OBJECTIVE OF SHIP OF TREASURES: The objective of Ship of ...

OBJECTIVE OF RISK DEEP SPACE: Be the first to build ...

OBJECTIVE OF CHRISTMAS LIGHTS: Be the first player to complete ...

Guide: What Is the Anonymous Casino and How to Find the Best One

There are many traditional online casinos that have become more ...

OBJECTIVE OF SPOT IT!: The objective of Spot It! is ...

OBJECTIVE OF HEY, THAT’S MY FISH: The objective of Hey, ...

OBJECTIVE OF ECOSYSTEM: The objective of Ecosystem is to make ...

OBJECTIVE OF 7 WONDERS DUEL: The objective of 7 Wonders ...

How To Bring Your “A” Game With Sports Betting

Every sports bettor strives to bring up their "A" game ...