OBJECTIVE OF GOLF THE CARD GAME: The objective is to score the lowest number of points.

NUMBER OF CARDS: 1 to 3 decks, depending on variation and number of players.

HOW TO PLAY GOLF THE CARD GAME

Golf the card game is a widespread game but seldom documented in card-playing books. This is a consequence of the many names the game bears, it is also known as Polish Polka or Polish Poker, and the 4-card version is sometimes referred to as Turtle.

The 6-card variation of Golf is also known as Hara Kiri and the 9-card game is often called Crazy Nines. On this page, you will learn how to play and the golf card game rules for all variant card games.

This is the most commonly played form of the card game Golf. The game uses a standard 52 card deck for 2-8 players, if there are more than 8 players who wish to play, two decks may be combined.

Both the deal and the play pass clockwise. The dealer will then hand each player 4 cards, one card at a time. These cards are to be placed face-down in the shape of a square.

The cards that were not dealt then form a draw pile. The top card is drawn, and then the player places the drawn card face up to become the discard pile.

Before the play begins, players can look, only once, at the two cards nearest to them in their square layout. These cards must be kept secret from other players. Players may not look at the cards in their layout again unless they are discarding them during play or scoring them at the end of the game.

The player left of the dealer starts and play passes on clockwise. A turn offers players three options:

Players may draw a card from the draw pile. You may use this card to replace any four cards in your layout, but you cannot look at the face of the card you are replacing. Try and remember which card is the replacement. Move the card you choose to replace in your layout to the discard pile of face up cards. You can draw from this pile and simply discard the card, face-up, without using it.

Players may draw a card from the discard pile. Since these cards are face-up, you must use one to replace a card in your layout, then discard it. You may not put the drawn card back in the pile without changing your layout. 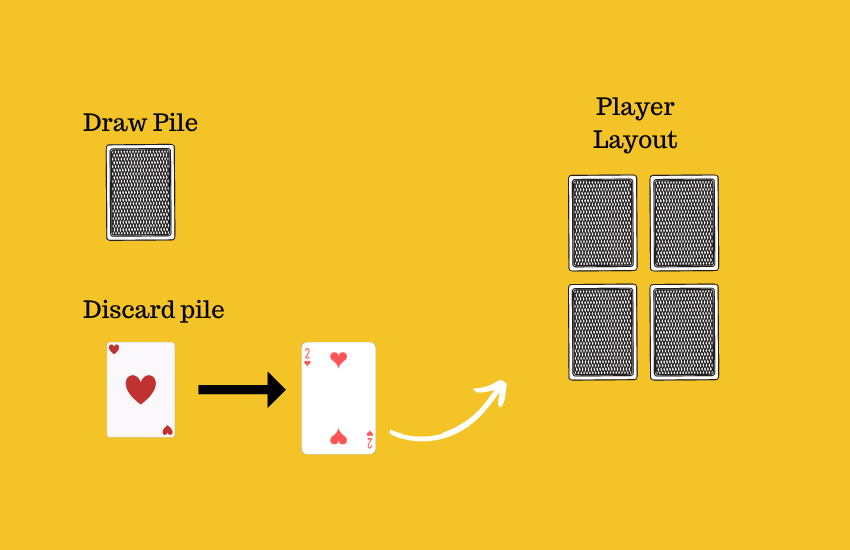 Players can also choose to knock. After you knock your turn is over. Play moves on in a normal fashion, other players may draw or discard, but they cannot knock. The play ends afterward. 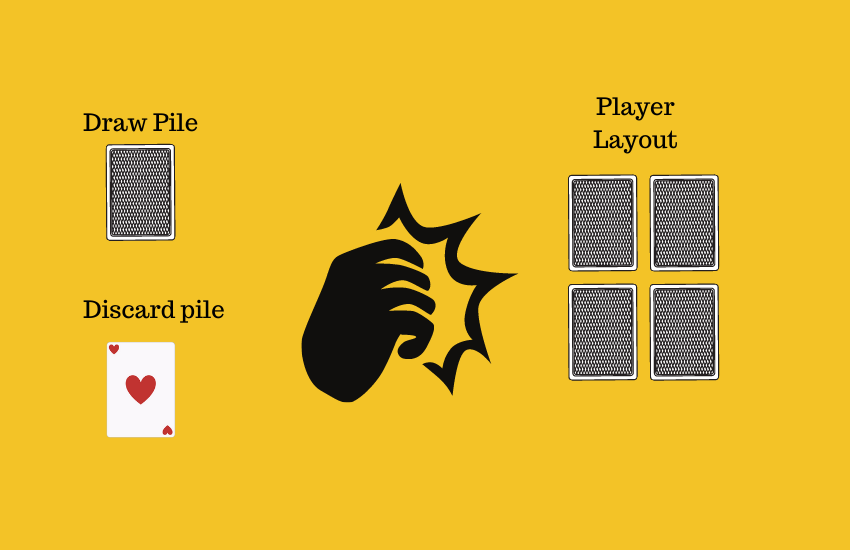 *Note: If you peep at your cards in your face-down layout, the card you look at must be discarded.

Scoring occurs at the end of each play. All player’s cards are flipped face-up for scoring.

The player with the lowest total score, summed after nine plays, is the winner.

In 6-card Golf pairs in a column score 0 points. The objective then in 6-card Golf is to make as many pairs as possible while keeping the unpaired cards a low denomination.

In a game with 2-4 players, a standard 52-card deck will suffice. Games with 4-8 players use two packs and games with more than 8 use three. Both the deal and the play move clockwise. Dealers deal 6 cards to each player, one at a time, to form a rectangular layout.

The cards that were not dealt form a draw pile. The top card is moved face-up and placed beside the draw pile, this card forms the discard pile. Before the play begins, players may flip any two cards in their layout face-up. No other cards may be looked at unless they are being discarded or if the situation is called for during game play.

The player left of the deal starts and then play is passed on clockwise. During your turn, you may either draw from the draw or discard pile. Drawn cards may be used to replace any 6 cards in your layout. However, if you choose to replace a face-down card you may not look at it before doing so. Place the new card face-up in your layout and then the old card face-up on the discard pile.

Cards drawn from the face-down pile may be discarded without being used. Cards from the discard pile must be used to replace a card your layout.

Play ends when all player’s cards are face-up and scoring begins.

Scoring occurs at the end of each play. All player’s cards are flipped face-up for scoring.

The player with the lowest total score, summed after nine plays, is the winner.

Eight Card Golf is played almost identically to six card Golf, however, the layout is 2 rows of four cards as opposed to three. One deck is used in games with 2-4 players and more decks may be added as needed. The dealer then deals each player (starting to their left) eight cards, one at a time, in a rectangular layout (4×2). The cards that were not dealt then form a draw pile. The top card is moved face-up and placed beside the draw pile, this card forms the discard pile. The player left of the deal then starts and play passes on clockwise.

Players begin their turn by turning two cards in one column face-up. Players then may draw cards from the draw or discard pile, giving them three options:

After every player has their first turn, each player can turn 2 or 3 cards face-up. Play continues in the same direction.

If a layout has one face-down card remaining one may still draw a card from the draw pile and discard it without looking at the last card. When one player’s layout is face-up one turn each remains. Other players’ remaining face-down cards are flipped after the last turns and scoring beings.

Having a negative score is possible. The player with the lowest total score, summed after nine plays, is the winner.

Nine Card Golf is better known as Crazy Nines or Nines. This variant is played with 2 standard decks. The layout is nine cards in a 3×3 square. Three cards are turned face-up to begin play. The same rules as 6-card Golf apply, except pairs do not score zero points, three matching cards in a column score zero points. In the event you have two intersecting rows of equal cards, players must before the game consider how to score this. Many players will remove the block or line of equal cards.

This game must be played with at least two standard card decks. Players are dealt 5 cards in the same fashion as other versions of Golf, in a 5×2 rectangular layout. Any two cards may be flipped face-up. From then on, 6-card Golf card game rules apply.

Love this game? Then try out Taki!

How many decks of cards are used for Golf?

One to three decks are used depending on which version of the game and how many players will be participating.

How are jokers used in Golf?

Jokers are only used in certain variations. They tend to be worth negative points and in some cases have special abilities to shuffle other players layouts.

Is it possible to play golf with 2 players?

yes, all the included golf variations above allow for 2-player games.

How do win a game of Golf the card game?

The goal of Golf is to have the lwoest score at the end of a predetermined number of deals.

OBJECTIVE OF BACCHUS: The objective of Bacchus is to be ...

OBJECTIVE OF JUST ONE: Players work together to help the active ...

OBJECTIVE OF MOVING THE STARS: To be the player that wins ...

OBJECTIVE OF HEDBANZ: To be the first player to win three ...

OBJECTIVE OF ARTSEE: The objective of Artsee is to be ...

OBJECTIVE OF ARKHAM NOIR: The objective of Arkham Noir is ...

OBJECTIVE OF ATTILA: The objective of Attila is to trap ...

OBJECTIVE OF BACCHUS: The objective of Bacchus is to be ...

History of Soccer in Asia

Soccer, often known as football, is one of the most ...

OBJECTIVE OF AUSONIA: The objective of Ausonia is to be ...

OBJECTIVE OF BALLOON STOMP: The objective of Balloon Stomp is ...

OBJECTIVE OF FRIENDLY FEUD: The objective of Friendly Feud is ...